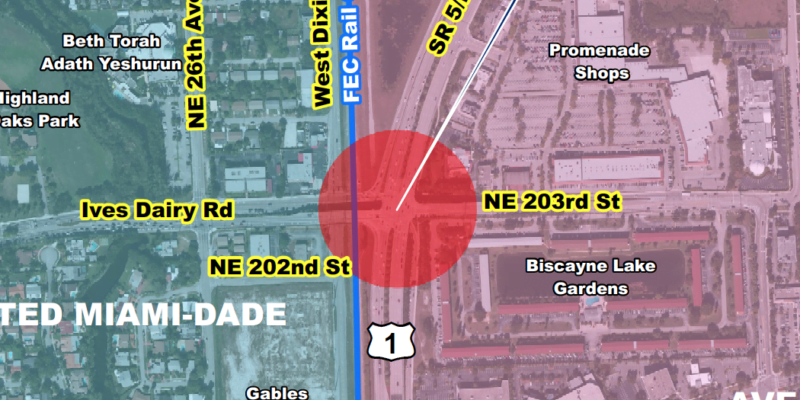 State of Florida Department of Transportation

Thank you again for attending the public meeting held on June 8, 2016 at the Aventura City Hall concerning FDOT’s proposed improvements to the N.E. 203rd Street and U.S. 1 intersection.  As mentioned, we have the privilege of serving as the President and Immediate Past President of the Sky Lake–Highland Lakes Area Homeowners Association (HOA), advocating on behalf of an unincorporated community of over 13,000 residents.

As you clearly heard from the nearly one hundred (100) residents in attendance that evening, we urge the Florida Department of Transportation (FDOT) to consider adopting the alternative design calling for a westbound overpass at 203rd Street adjacent to the current eastbound overpass and lowering U.S. 1 to street level.  A substantial majority of our residents prefer this option in lieu of the currently proposed design calling for a jughandle or horse-shoe shaped loop that would snake up, over, and down West Dixie Highway and through twenty-five (25) community businesses that comprise a tax base of over $5.2 million from which we derive county services.

Considering that this intersection provides ingress and egress to Aventura Mall, the second largest shopping mall in the U.S. in terms of visitors, now undergoing an expansion, we further urge FDOT concomitantly to consider a comprehensive plan, in conjunction with FDOT District 4 and Miami-Dade County to relieve traffic congestion in the area.  All parties must come to the table to arrive at a holistic solution to the traffic challenges in our area, including improvements at Miami Gardens Drive, NE 215th Street (County Line Road) and Hallandale Beach Blvd. A holistic approach is especially critical given the expected passage of 100 trains daily across these intersections.

On January 26, 2016 Mr. Harold Desdunes responded to my December 1, 2016 letter to FDOT Assistant Secretary Mr. Richard Beiter as well as to my discussions with Lieutenant Governor, Mr. Carlos Lopez Cantera, FDOT Secretary, Jim Boxold and prior FDOT District 6 Secretary, Gus Pago.  In that letter Mr. Desdunes stated that FDOT’s, “foremost interest is vehicular passenger and pedestrian safety…[and] on the quality of life for area residents when this increased rail traffic commences.”  We submit that FDOT’s current design does not meet these objectives and if implemented would violate the National Environmental Policy Act (NEPA) because it:

As we have stated before, while we do not profess to being engineering experts, we truly believe that a safer, wiser alternative must exist that would be considerably more compatible with the residential nature of our bedroom community and not require the destruction of these cherished businesses, including a house of worship, bringing a vital tax base for our community.

Thank you for considering our concerns and suggestions.  We look forward to hearing from you and your colleagues concerning this critical matter prior to reaching any final decisions.

[1] We note this intersection still is about ¼ mile away from Highland Oaks Middle School and most residents we polled, including Miami Dade County Public School officials, do not appear concerned about the safety of students attending HOM as a result of the alternative design that the majority of our community now prefers despite opposition that may have existed decades ago.